You have nothing to worry about with Smartphone protect

Have you ever imagined what would you do without your smartphone, tablet or smart gadgets? It is hard without them because they help you to multitask. You constantly use them and this means that there is a higher change to break them. When something like this happens, there is no turning back.

Fortunately, there is Smartphone protect - insurance for your new device. You can take it from Yettel and won't be sorry when your phone senses the gravity or gets in foreign hands against your will.

•Accidental damage (e.g. breakage of the screen or wetting)
•Intentional malicious damage caused by someone else

•Accidental damage (e.g. breakage of the screen or wetting)
•Intentional malicious damage caused by someone else
•Theft - a robbery, burglary or pickpocketing.

What the insurance provides you with:

Up to 2 approved claims (damages) within every 12 months while the policy is in force.

In case of replacement, the Insurer provides the same device or device with very similar characteristics.

Repair in Yettel’s service center in a short time and always using original replacement parts. During this time the Insurer provides a device for temporary use if there is eligible one.

Repair or replacement of the device.

No monetary compensation is provided under the insurance.

What is the coverage:

Coverage comes in force immediately after the insurance is concluded.

How and when the Insurance is concluded:

•Upon purchasing a new smart device from Yettel, whether it is paid in cash or on leasing.
•For customers using a mobile services subscription plan by Yettel.
•At the time of purchase when paying the price in cash/ on leasing or up to 180 days afterwards.
•On spot in a Yettel store.
•When an insurance contract is signed.

What is the premium and what I pay:

The Insurer, who is he:

Smartphone protect is offered through "Yettel Bulgaria" EAD as an Insurance Agent of Chubb European Group SE, as well as through commercial partners of Yettel in their capacity as intermediaries offering insurance products as an additional activity.

In case of Theft - robbery, burglary or pickpocketing:

•Within 48 hours you must notify the police and take an official document which describes which device is an object of the theft. This document should be submitted to the Insurer.
•Notify Yettel via the Customer Service Department at 123 (089 123) so we can restrict outgoing calls from the SIM card and you can file your claim to the Insurer.
• Once your claim is approved, visit a Yettel store to sign the necessary documents and get your new device. The Insurer will provide you with the same device or a device with very similar characteristics.

It is good to know:

The document certifying the contract concluded between the Insurer and the Insured. Under this Insurance policy, the insurer accepts to bear certain coverages/risks against a certain price/premium and self-participation and to indemnify the beneficiary according to incurred damages. It contains the specific parameters of the insurance and has a unique number for each insured device. The insurance policy is concluded in writing and is part of the insurance contract. It also includes other documents such as General Terms and Conditions, Addendums, etc.

The insurance policy can also be concluded within 180 calendar days after the purchase/lease of a new device. In these cases, the device must be intact and fully operational, which is proven by presenting it in a Yettel store upon the conclusion of the insurance policy.

Risks, the unintentional occurrence of which is covered by the insurance policy within the period of the insurance

“Accidental damage” or "Damage" means any sudden or unpredictable physical damage or accidental destruction of the device which prevents its proper operation. This includes damage resulting from the device being in contact with water, moisture, and other liquids, as well as in case of dropping it from hand.

Malicious damage is when someone unauthorized by the Insured damages the device maliciously.

Malicious damage and Theft are evidenced by the submission of a protocol (report) by the police. The customer must report the incident to the police within 48 hours of its occurrence. The protocol must contain the data of the injured or stolen device as well as IMEI or serial number.

The insurance does not cover events such as:

Theft, if you have chosen Smartphone protect;

Loss of the device, other than theft

Repair or replacement according to the manufacturer's or supplier's warranty

Damage due to wearing out, cleaning, repairs by an unauthorized person, weather conditions, etc.

Damage that does not affect the operation of the device (e.g. scratches on the back)

The full information on what is covered and, accordingly, what is not covered can be found in
Information document on an insurance product (in Bulgarian)
Terms of Service (in Bulgarian)

The period during which the Insurer covers the insurance risk. The insurance period for both Smartphone protect and Smartphone protect + is 1 month. It is equal to the billing cycle for the subscription contract with Yettel.
Insurance contracts shall be termless and may be terminated at any time by the insured person and in the cases provided for in the Terms of Service (in Bulgarian).

Monthly sum of money or else a price of insurance that the Insured owes to the Insurer.

The premium is paid monthly, under the conditions and term of payment of the subscription to Yettel.

After signing the insurance policy the cover begins to act immediately, but the premium until the beginning of the next billing cycle is not due to the Insured.

A sum of money that must be paid by the insured when receives a repaired or a new device.

The amount of the self-participation is indicated in the insurance policy. It is paid by the customer before the repaired or replaced device is provided to him/her in a Yettel store.

An event that gives the Insurer an obligation to provide insurance indemnity.

A claim for damage can be filed to the insurer by the insured or any other person who is authorized in written form and familiar with the data on the policy and the circumstances of the claim.
The damage must be registered not later than 180 business days after a Theft or a Damage was detected, i.e. the occurrence of the insured event.
Damage is claimed by calling at 123 (089 123) from 10:00 to 19:00, on working days, where a Customer Service Department representative will assist and transfer the call to the Claims Administrator. Full information about the Claims Administrator is available in the Terms of Service (in Bulgarian).
As soon as possible, but not later than 7 (seven) business days after the occurrence of the insured event, a Yettel store must be visited. In the store they will provide you the claim registration form that summarises the key data from the insurance policy and the circumstances of the claim provided during the conversation with the administrator for a signature.
The insurer will not approve more than 2 claims within 12 months.

A repaired or a new device is received by the customer in case all due premiums and self-participation are already paid.

Changes to the insurance

The only change that may occur on an active policy is with the signing of an addendum, which is concluded upon the change of the device that the customer uses, due to certain circumstances (e.g. replacement of the device after an approved claim for Theft).

Termination of the Insurance

The insurance policy may be terminated at any time with a written statement by the Insured at a Yettel store. 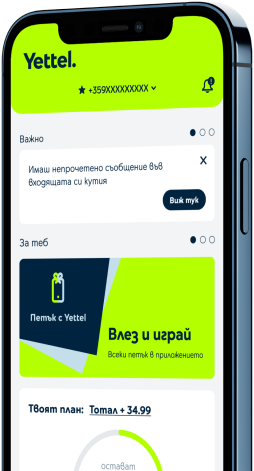