Minutes for calls to Bulgaria

The included minutes for calls in Yettel mobile network can be used only within the territory of the Republic of Bulgaria.

The included minutes for calls in Yettel mobile network can be used only within the territory of the Republic of Bulgaria.

The above Add-ons: 50 national and international minutes & 100 national and international minutes are valid for calls within the territory of Republic of Bulgaria.
The included in the corresponding add-on minutes are valid to the certain countries. After the minutes depletion or the add-on’s validity period expiration the calls to numbers from this countries will be charged according to the current Yettel pricelist for prepaid plans and add-ons.

The SMS sending in to 125 is free of charge for the territory of the Republic of Bulgaria.

The included MBs for applications are not available for voice communication.

You will be notified with SMS when depleting 80% of MB in each of the add-ons, as well as when its total depletion.

The add-ons can be activated in one of the following ways:
• Via YettelApp mobile application
• Via My Menu at *123# (free of charge)
• Via SMS to number 125 with the specified add-on text code (free of charge)
• Via the landing page lp.yettel.bg (applicable only for add-ons for mobile internet for tablets and laptops)

• When activating add-ons for mobile internet the included MB are at maximum speed. After depletion of the included MB or the expiration of the validity period, depends on what happens earlier, the mobile internet will be charged per MB according to the terms of a standard Yettel’s prepaid plan the current Yettel’s price list for prepaid services, add-ons and standard prices in roaming.

The SMS price to number 125 in roaming is 1,91 BGN.
• The add-on price will be deducted from your current credit.
• The SMS for add-on activation price, if it is due is deducted from your current credit.
• The validity period of the add-ons starts and the included minutes, SMS and/or MBs or the special price for voice calls are available for use after receiving a conformation SMS for successful add-on activation. The add-on’s validity expires on the mentioned date and time in the message.
• When changing to a standard prepaid plan of Yettel retain all available minutes and MBs, initially received, received upon recharging and purchased with add-ons and can be used until expiration of their validity.
•The minutes for national calls included in the add-ons do not apply to outgoing calls to short numbers (including Yettel Customer Service Center, type * numbers), value added service numbers, data and fax numbers, outgoing WAP calls and other specialized services. As of 01/02/2020, the same applies to numbers in the 0700 range. Yettel minutes are valid on the Yettel mobile network
• In case you use additional conditions upon top-up fee for recharging of credit and when choosing and activating of add-on with included call minutes, of combined add-on with included call minutes, SMS and MBs, valid within the Yettel network or add-on giving special price per minute to certain international destinations, the additional conditions – minutes and MB when recharging – are ceased. In these cases only the conditions of the Yettel’s standard prepaid plan will be applicable and you will no longer receive minutes and MB recharging and fee for it will not be deducted.
• In case of activation of new add-on with included minutes to Yettel mobile network and/or MB for free surfing, before the validity expiry of such minutes, SMS and/or MB from the additional conditions of the current prepaid plan/starter prepaid pack, the new included amount of minutes within Yettel mobile network and/or MB for surfing will be added to the existing ones, and for all available minutes to Yettel mobile network and/or MB for surfing the longer validity period is established – of the new add-on or the current received under additional conditions of the used prepaid plan/ starter prepaid pack.
• The existing minutes to For Friends group are valid to 5 numbers from Yettel mobile network, included in the group. These numbers cannot be a short numbers and numbers for voice services with added value.
• You have the right to refuse purchased add-on/s in a 14 days period after the purchase, unless you have started utilizing them. In case of add-on purchase refusal, the purchase amount will be returned to the credit of the prepaid card. More information on www.yettel.bg

Depletion of the add-ons minutes

• The charging of national and international calls is performed in 60-seconds intervals, as each started 60-seconds interval is accounted and charged as an entire minute.
• The charging of calls and SMS in roaming is according to the terms of a relevant add-on and if it is not available or does not providing such included consumption – according to a standard roaming prices.
• The internet traffic in Bulgaria, generated under the conditions of add-ons From-To 8,49 leva, add-on Mobile internet 9,99 leva and add-on Mobile internet 14,99/19,99 BGN, till depletion of the included consumption in the add-on or expiration of its validity is available in the 2G/3G and 4G/LTE Yettel network in Bulgaria (through APN telenorbg) at maximum speed according to 2G/3G и 4G/ LTE network’s standart.
• The use of the Yettel 4G/LTE network from prepaid customers is possible with a compatible SIM card and device in 4G network coverage zone.

All standard prices, terms and add-ons for using in roaming you can see in here.


All prices above are with VAT included.

For all prices not listed above applies the terms of the used prepaid plan and the current Yettel pricelist for prepaid services and add-ons. 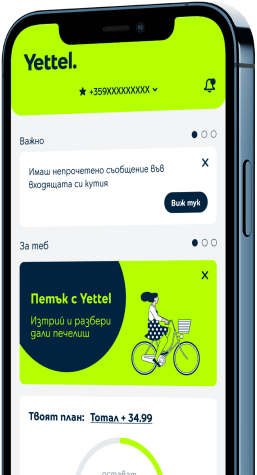